Voting Is One Important Reason To Become a U.S. Citizen 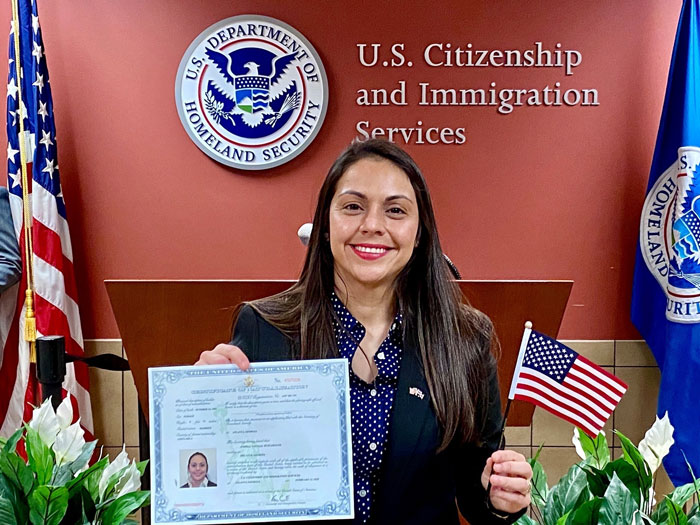 The journey from being an undocumented immigrant to a U.S citizen can seem long and difficult, but it is possible. Our client Andrea Bustamante shows non-U.S. citizens that their American Dream is within reach and citizenship is worth the struggle.

Andrea is originally from San Jose, Costa Rica. Like many immigrant families, Andrea’s parents wanted to provide their children with better opportunities.

They moved to the United States when she was just a young child. After living undocumented for years, she was ready to achieve legal status in the U.S. as an adult. She was tired of living with fear always present in her mind.

While she did obtain her green card (after over 10 years of fighting for it) with the help of STERN Law, she realized that all of her hurdles weren’t in the past. While at work, getting a soccer field ready for a game with her dogs by her side, a man called the police because he felt threatened by her dogs.

It became a criminal issue, and she was scared of deportation. Thankfully, her case was dismissed. Despite that, she was scared. As an immigrant, authority is intimidating. As a permanent resident, not yet a U.S. citizen, deportation is always a possibility.

The Struggle To Obtain Citizenship

STERN Law was excited to help Andrea obtain her citizenship, but she was quite reluctant. She wasn’t sure about becoming a U.S. citizen. Having already gone through a difficult application process for her green card and the fear of opening up and being vulnerable again stopped Andrea from actively pursuing her citizenship.

Andrea often felt disempowered, like the U.S. didn’t truly support her or want immigrants to live here. With our encouragement and the support of her family, Andrea came to the conclusion that she had to move forward and be a voice for other immigrants. Ultimately, she decided to stand up tall and fight again for her citizenship because it gave her the right to vote and speak up for those who couldn’t.

With help from STERN Law, she eventually took the next step and became a U.S. citizen. Now that she is a citizen, she is starting to feel that she no longer has to be afraid of police or immigration authorities. She wants to speak up for herself and other immigrants and people of color who are afraid to use their voices. Andrea believes that people need an attorney like those at STERN Law who not only understand the immigrant experience, but build their client’s confidence to speak up and relentlessly pursue their American Dream.

When Can Immigrants Vote?

The United States has a lot of strict rules about who can and cannot vote in elections. Immigrants, in particular, have been the subject of controversy when there are debates about voting rights.

There is a difference between the rights you have as a legal permanent resident and as a U.S. citizen. Those with green cards are not eligible to vote in U.S. elections. If you are a non-U.S. citizen, you are unable to participate in government elections.

You can only vote once you have finished the process of becoming a U.S. citizen. You can register as soon as it’s official. Right after Andrea received her citizenship, she went and registered to vote. Now, she’s about to vote in her first U.S. Presidential election.

If you aren’t a U.S. citizen yet, do not try to vote. If you do, your application for citizenship could be denied and you are at risk for deportation. However, encourage all of your U.S. citizen friends and family to exercise their right for themselves and others like you. Stand up and take action – become a U.S. citizen as soon as you’re eligible!

The Importance of Voting for Immigrants

Immigrants have a strong effect on the outcome of U.S elections. Voting is a way for you to have your voice heard and to pick candidates who represent your values, culture, and interests in American policies. You have the power to make a difference.

If you are a U.S. citizen, to register to vote you must:

If you fit these qualifications, you can register to vote online. Simply print the form, fill it out, and mail it to your local election office by the cut-off date. If you believe you are already registered to vote, you can confirm it online as well.

I Want To Become a U.S. Citizen So I Can Vote

If you are already a permanent resident and want to become a U.S. citizen and express your right to vote, there are many requirements you need to meet.

You may qualify for U.S. citizenship naturalization if you have:

As a U.S. citizen, not only will you receive the right to vote, you will also be protected from deportation, have access to more federal jobs and privileges, and you can bring family members to the United States.

STERN Law Can Help You Like We Helped Andrea

Do you want to become a U.S. citizen? We helped Andrea obtain her residency and citizenship, and we can help you, too! She recommends STERN Law to immigrants looking to secure their place in the United States.

Whatever step you want to take, make sure it’s a step forward. STERN Law will proudly fight to defend your American Dream. Contact us today to get started.