What Is Biden’s Immigration Plan? 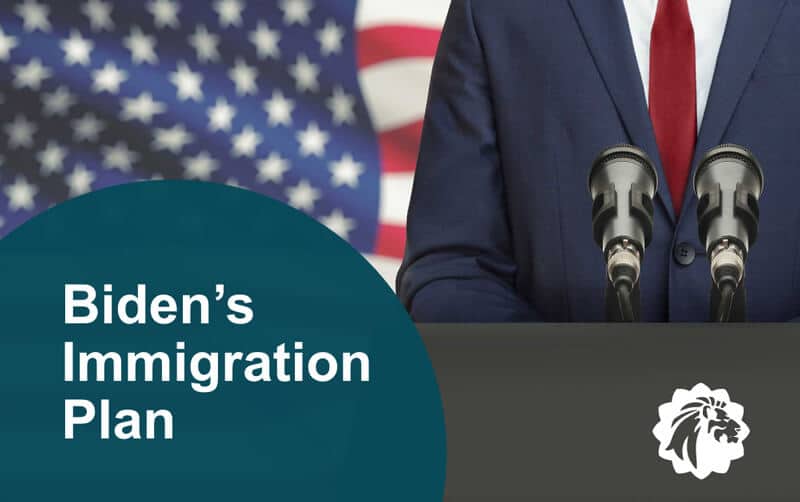 After a historic and unprecedented election, Joe Biden will be the next President of the United States. The past four years have been exhausting, particularly for immigrants, and now we can feel some relief knowing that the current president’s cuts to legal immigration will soon be over.

In the last four years, over 900 changes have been made to immigration policies, all of which were harmful to immigrants. Trump has fully taken advantage of the pandemic and has used it as a scapegoat for cutting legal immigration.

With Biden set to take over the presidency in 2021, we look forward to the positive changes he will make to current harmful laws in place. While we wait for a change in administration, it’s important to remember that Trump still has time to harm legal immigration in the upcoming months.

If you haven’t secured your legal status in the United States, don’t be complacent or assume you will always have a future opportunity to secure residency or citizenship because Biden won the election. We recommend you contact STERN Law today to understand the necessary steps to secure your legal residency before Trump does any more harm to legal immigration.

Trump’s Past Actions
Throughout Trump’s presidency, he has implemented serious anti-immigration policies, using the pandemic as an excuse. Here are just a few of the discriminatory actions he has taken against legal immigration:

Undo Trump’s damage and reclaim America’s values
Modernize America’s immigration system
Welcome immigrants in our communities
Reassert America’s commitment to asylum-seekers and refugees
In the first 100 days, he will undo some of Trump’s harsher policies. His highest priority will be metering, the asylum transit ban, and COVID 19 entry limitations. He wants to implement a 100-day freeze on deportations while his administration readdresses who immigration agents can arrest.

According to people close to Biden, he plans to:

Trump has dramatically altered these agencies. Biden will fix the leadership issues, budget problems, and mission statements that have changed in the past four years. While the changes Trump made can’t be reversed overnight, the process will begin once Biden is in office.

Here are some of the ways he has said he will reform immigration agencies:

Only deport immigrants who present a threat to national security
Improve accountability for agencies like ICE
End for-profit detention centers
Make immigration courts independent from the DOJ
As far as immigration courts are concerned, Trump replaced many fair judges during his time in office, so the courts’ challenges could remain challenging to fix.

The Legal Process of Reversing Trump’s Policies
The Biden Presidency will result in many lawsuits becoming irrelevant. For example, if Biden directs USCIS to accept DACA applications, lawsuits that were filed to challenge Trump’s refusal to accept Dreamer’s applications will no longer need to continue. While Biden plans to undo a lot of the damage, he has to follow the Administrative Procedures Act (APA) laws to it the right way. Using the DACA example, the U.S. Supreme Court ruled that Trump illegally rescinded the (Obama-implemented) program because he didn’t go through the APA’s proper legal steps. Biden will have to be careful not to make this same mistake and follow the lengthy legal process to do it right.

Trump may unleash a barrage of anti-immigrant policies in the next couple of months. Any actions he takes before inauguration day will have to be appropriately reversed by the Biden administration.

While many believe that Trump’s policies are wrong, Biden will have to convince lawmakers and policy wonks why we need to take action against those discriminatory actions. Legally, he can’t just flip a switch and undo everything. It will take time and will depend on the cabinet and agency seats.

What We Don’t Know About Biden

While we are optimistic about many of the changes the Biden administration will implement, there are a few issues he has been quiet on thus far.

Expanded Denaturalization Efforts
The Trump administration launched a denaturalization operation, stripping American immigrations of their citizenship. Typically, denaturalization is only used in extreme circumstances, but Trump dramatically expanded it, making it clear that no one is safe in his America.

Biden hasn’t been nearly as outspoken about this particular issue as he has been on others, like the Muslim ban, reforming immigration agencies, DACA, and other immigration issues.

While we can assume Biden’s administration does not agree with this anti-immigration operation, he and his people have been relatively quiet about any plans to reverse it.

Expedited Removal Expansion
Earlier this year, the DHS announced plans to expand Expedited Removal under the Trump administration. This means individuals who are undocumented, who entered the U.S. without an inspection, and who cannot prove they have resided in the United States for more than two years could be subject to expedited removal.

This greatly expanded who could be deported without a hearing before an immigration judge, setting immigrant communities on high alert. It means you could get deported without time to properly contact your loved ones or prepare for your departure at home.

Biden has not announced any specific plans on dealing with expanded expedited removal, but it’s hard to imagine they wouldn’t reverse it with all of their other stated goals.

Take Steps Towards Legal Status Before Biden Takes Office
While hope is on the horizon for immigrants, we still have to get through the rest of Trump’s presidency. His previous anti-immigration actions tell us he isn’t finished making cuts to legal immigration yet.

We recommend taking steps to protect you and your family now rather than later. Don’t wait for Biden to take office to act. STERN Law is here to help walk you through each step of the experience. We will help you attain legal status and keep your family safe in the United States. Contact us today to schedule a conversation that could change your life for the better.