Thousands Of Temporary Workers Are At Risk. How Can You Protect Yourself? 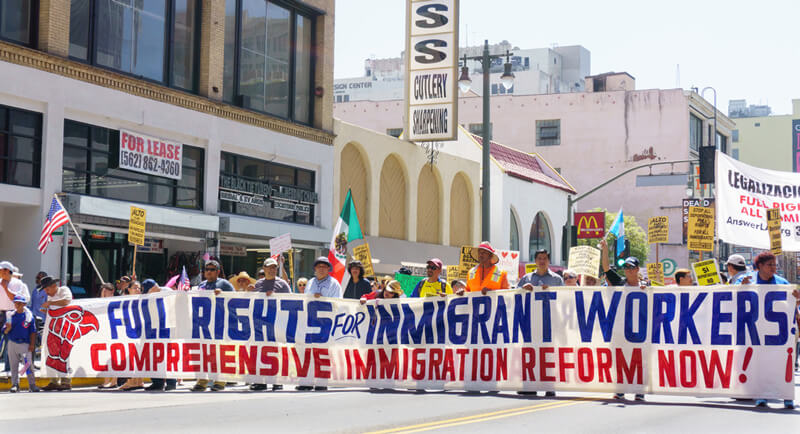 In the middle of a global pandemic, we can’t seem to take our minds off of those affected by the virus, but what about those who are losing their jobs and are facing deportation? This is the reality for many non-US citizens who are working with temporary work visas. The Trump administration made it clear that for the time being, H-1B visa owners have a limited time here in the US, especially if they lost their jobs as a result of the pandemic. This means that over 200,000 temporary workers who hold H-1B visas could be losing their legal status by the end of the year.

The Proclamation Targets Temporary Workers
This is yet another anti-immigration initiative tied to the COVID-19 pandemic, which is causing uncertainty for hard-working members of the Atlanta community. The Trump Administration issued a Proclamation that limits the rights of temporary workers in the U.S. Now H-1B visa holders are at risk of losing their legal status as temporary workers, jeopardizing their chances for future permanent residency. This situation is only going to grow more challenging as non-US citizens and their families are forced to leave the country.

The Proclamation, which officially went into effect on June 24, 2020, applies to the following:
Those who hold a H-1B, H-2B, L-1 or J-1 visa
The dependents of those listed above
Non-US citizens who:
– Are outside of the US
– Do not have a valid immigrant visa
– Do not have a valid official travel document other than a visa
It does not apply to:
Lawful Permanent Residents
The spouse or child of US citizens
Anyone seeking to enter the United States to provide temporary labor or services essential to the United States food supply chain
Anyone whose entry would be in the national interest as determined by the Secretary of State, the Secretary of Homeland Security, or their respective designees
Specialized Temporary Workers Are Most at Risk
H-1B visas are a temporary status for specialized workers. Many of the temporary workers who possess these kinds of visas are in the technology and research field. H-2B visas are given on a seasonal basis. Due to the COVID-19 crisis, many of these skilled temporary workers have been furloughed, fired, or put on paid leave. Due to the fact that the process of becoming a permanent resident is a lengthy one, many temporary workers have been left on the back end waiting for their employer to seek permanent legal residence for them. As if this waiting game isn’t enough, they are expected over the next few weeks to have a halt on the issuance of these types of visas. Following the termination from their jobs, these individuals have a 60-day grace period in which they are allowed to be in the United States.

The Logic Behind The Proclamation
The U.S. recently experienced a rapid spike in the unemployment rate in the nation that peaked at 14.7%, due to the pandemic. As a result, many who back the Trump Administration’s Proclamation, believe it is in Congress’s best interest to halt employment for foreigners and give the remaining jobs to American job seekers. While, in theory, this may seem like a logical way to protect the U.S. born-workforce, it is important to consider that the skills that these temporary workers have are not exactly abundant amongst US citizens. Opponents of the proclamation would argue that record-high unemployment rates, businesses foreclosures, in combination with the deportation of temporary workers, could actually hurt the economy.

This is not the first action of Trump’s Administration to create anti-immigration laws in the U.S., and with the pandemic in place, it is the perfect excuse to execute them faster and more radically, affecting all non-US citizens and our democracy.

There is Still Time to Protect Yourself
This proclamation is a concerning development for non-US citizens residing in the Atlanta area, who are living and working in the country legally. We understand that as temporary workers you come to the U.S. for an opportunity to work and contribute, towards a brighter future, and you do not want to lose that future you are fighting so hard to create for you and your loved ones. As it gets more and more challenging to secure status in the U.S., it is important not to lose hope and instead take action. The first thing you need to do is understand your legal rights as this proclamation takes effect and extends through at least December 31, 2020.

If you’re a temporary visa holder, you may have options available to adjust your status through other immigration benefits. Applying for Adjustment of Status (AOS) allows individuals to stay in the United States while their application is being processed, even if their visa expires before the request for permanent residency is approved.

Why is this important?
Adjusting your status will alleviate the timeline pressures of an expiring visa.

Why is this important right now?
Policies are changing faster than ever due to unprecedented times
Beginning your application today is the best precaution for policies that may change tomorrow
Temporary workers might have to leave the country if we don’t fight for their rights now
Consider obtaining legal counsel from attorneys experienced in working with complex immigration cases including but not limited to temporary workers visas. At STERN Law we strongly urge those seeking legal status to take advantage of the current immigration laws that may be available to you without delay.