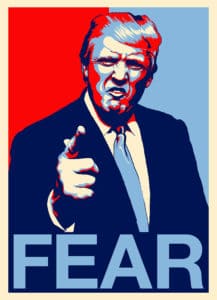 It’s official – the Republican National Convention ended with a stamp-of-approval on Trump for President. With a speech that painted a gloomy picture of a divided nation, Trump accepted the nomination and could become the President of the United States.

This is a common theme of commentary in our office conference room lately. Our clients are non-U.S. citizens – hopeful immigrants – who need our help to achieve immigration status or stop their deportation. “We better act before Trump becomes President!” is often mentioned in jest along with an uneasy chuckle – but this ever-present fear sits right at the surface. This fear is undeniable and understandable, but is it necessary?

A discussion about the reality of immigration policy under a President Trump is crucial at this point. We previously discussed the primary candidates’ immigration positions, but let’s take a closer look at the most recent official platform.

Make Mexico pay for the wall *(Rejected.)
Triple the number of ICE officers *(FY 2016 budget allowed for only 25 additional full-time positions)
Nationwide E-verify for employees *(Already exists.)
End catch-and-release and replace with detention *(Subject to budget restraints.)
Defund sanctuary cities *(Already exists.)
Visa tracking system with stronger penalties for overstaying visas *(Subject to budget restraints & Requires act of Congress.)
Make ICE cooperate with local gang task forces *(Criminal Alien Program already exists and FY 2017 budget includes 9.46% increase.)
End birthright citizenship/no immediate citizenship if U.S. born *(Requires Constitutional Amendment.)
Increase H1B wages/employers pay more for foreign workers *(See below)
Requirements to hire U.S. Americans first *(Ignores reality that employers wouldn’t choose hassle/cost of visa process over qualified U.S. workers)
Applicants for U.S. entry must show proof of availability of funds & not abuse welfare *(Already exists.)
End J-1 job programs for foreign youth
Increase standards of admission for refugees and asylum seekers *(Only 1.6 % of Mexicans seeking political asylum and overall only 49.4 % have been approved in last 5 yrs)
Restrict new green card issuance for a time to make employers hire domestically *(Unsupported by economists and immigration experts.)
Beyond his proposals, Trump has claimed he will deport 11.2 million undocumented individuals from the country, which would theoretically cost us $400-$600 billion. Now he says maybe he will be nice and let them stay. While groups like the ACLU have called this plan unconstitutional, it is even more surprising that a presidential candidate does not understand that the Department of Homeland Security (DHS) simply does not have the ability to do so. Despite a 1.37 % increase for Immigration and Customs Enforcement (ICE) in FY 2017, the net continues to narrow for those who are priorities for deportation.

The U.S. Government does not have enough money to deport 11.2 million people and in response initiated the Priority Enforcement Policy to better focus their limited resources. It’s a wonder whether the candidate has read the PEP Policy Memo? Enforcement realities are factors that Trump appears to completely ignore. It seems like many Americans agree with his ideas, but an interesting poll shows that more Republicans support a path to citizenship over building a wall. A plan for mass deportation is not only impractical, difficult and hurtful to the country, but it is legally questionable. In response to the criticism, Trump has expressed that his plan would allow those deported to re-enter the United States “legally,” and that deportation would be “humane.” However, according to the Immigration and Nationality Act, implemented by Congress, individuals who have been removed from the country are – by law – inadmissible for at least 10 years.

In response to a shared concern of a Trump presidency, it is important to remember that the power of the U.S. President is limited, and the promises of presidential campaigns are strategic. President Barack Obama’s ran on a platform of humanitarian and just immigration reform; yet the number of deportations during his time in office have been the highest in national history. Of course, to be fair, most if not all of Obama’s attempts at immigration reform were blocked by Congress or Senate. This is also why Trump would fail at executing the majority of his plans; other branches of the government would work to check and balance his proposed power.

Although it is important to be wary and in control of your immigration status where possible (become a U.S. Citizen and vote!), we recommend that non-citizens and families not worry too much about a future with Trump. We will work to Defend the American Dream no matter who is in office!