Rally to Stop ICE and Inspire Us All 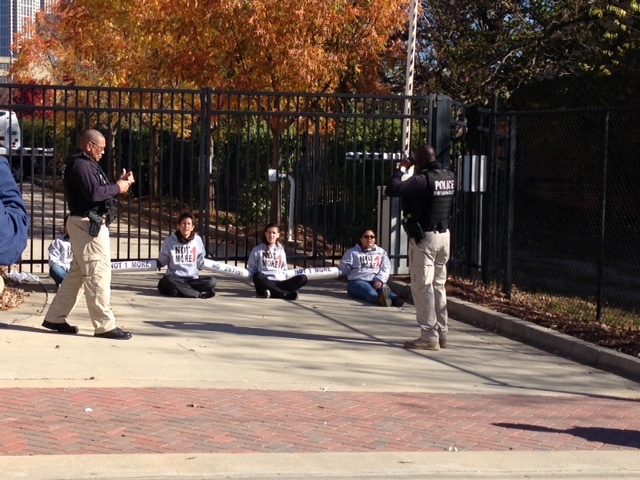 As a solo practitioner, I am more able to dedicate time to causes and efforts that I believe are important. On Tuesday of this week, I was honored to participate in the Rally Against ICE Deportations at the Atlanta Immigration ICE Building. Amazingly brave men and women, most of whom were undocumented, put their bodies and freedom on the line to boldly state that the deportation of those deeply rooted in our communities is wrong, and it must be stopped.

In an effort to block further deportations however possible, 15 people chained themselves to the gates of ICE, with bike locks and handcuffs, and connected themselves with one another so as to create a blockade from the ICE deportation buses from entering or leaving with deported brethren. For hours, in acts of civil disobedience and protest we chanted, “Not one more!,” “No papers, no fear!,” and “Shut Down Ice!” Did any of us believe that this action, or the others simultaneously happening in other cities across the country, would cause the Department of Homeland Security to stop deporting people or to close down ICE? No, of course not. However, the message was clear: If the President does not use his administrative powers to stop deportations in broader situations than only for military families and young arrivals, members of the community will use our own power to take action. Deferred Action For All is the message. Families are destroyed, children are left behind and thrown into the state foster system, and overall – human beings who have only asserted their right to have sustenance for their families are treated as prisoners.

These 15 brave men and women put their bodies where their hearts are – with their brothers and sisters behind bars and tall walls. They were all arrested. These 15, and others straining their voices to proclaim our message loudly, are inspirational. I am moved to do more and help. #not1more

Check out the news reports of the action here and here.