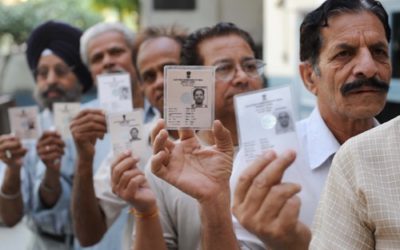 Let’s take a look at the presidential candidates on immigration, as many prepare to cast their presidential primary votes.

For the Democrats, Hillary Clinton and Bernie Sanders are similar in their positions. Not surprisingly, the Republican candidates’ ideas for immigration reform are far apart from the Dems but close to one another.

Hillary: Addresses the issue on her website with a bold statement (literally), “America needs comprehensive immigration reform with a pathway to citizenship.” What does that look like to the former Secretary of State? She…

wants to end family detention and close private immigration detention centers;
stands for the executive actions implemented (and attempted) by President Obama and would continue to “sympathize” with other cases should Congress refuse to address the need for comprehensive immigration reform (We all want to know her approach to accomplish reform with the current Congress);
wishes to promote naturalization by creating fee waivers for applications, increasing assistance for language programs for those wishing to learn and improve their English, as well as educate the community about how naturalization works;
*It is important to note that immigration petitions do not go from “no status” to “United States Citizen.” Often politicians forget that there is a middle ground known as Lawful Permanent Residency (LPR) and many other, long steps in between.

seeks to ensure that the process of deportation and immigration as a whole is conducted in a humane manner; Those who are priority for deportation such as criminals and other types of offenders will be removed. For those coming to this country with the intention of obtaining asylum, she wishes for them to have a legitimate chance to tell their stories.

Bernie: “A fair and Humane Immigration Policy.” The Senator …

believes that healthcare is not a privilege but a right for all, so it comes as no surprise that he seeks to allow immigrants the ability to purchase health coverage under the Affordable Care Act;
believes there should be “whistleblower” visas for workers who report abuse and employer violations;
*There are common abuses of undocumented workers who receive harsh treatment and well-below standard wages, and this has even escalated to human trafficking of foreign workers who are afraid to speak up or seek help.

seeks to employ humanitarian parole so those who have been removed have the chance to return to the country to once again be united with their families;
also wishes to eliminate the presence of harsh deportation programs and end private detention centers.
Republican candidates

Ted Cruz: Where does he stand on immigration? He plans to require a significant increase in budget dollars to increase enforcement. According to his official page, we see:

“Build a wall that works” The unsecured border with Mexico invites illegal immigrants, criminals, and terrorists to tread on American soil; commits to completing the wall;
*No statistics have been presented regarding any reduction in illegal border crossings since the implementation of the current wall.

“Triple the number of Border Patrol agents;” plans to dedicate the necessary force to secure border as the federal government’s obligation;
“Increase vital aerial surveillance and other technology along the border;”
“Finish the biometric tracking system at our nation’s ports of entry” in order to efficiently track those who enter and exit the country. *This exists already, but it is an imperfect system.
seeks to increase deportations and stop increases in legal immigration so long as unemployment amongst Americans remains high;
seeks to end birthright citizenship
*This would prevent a U.S. born child from obtaining citizenship at birth simply based on the nationality of their parent. It would require a constitutional amendment.

Donald Trump: Ironically coming between two people of Latin descent, Trump has probably been the most outspoken of all the Republican candidates when it comes to immigration. Many are familiar with his statements regarding the need for a wall that Mexico will help to build, Mexico not sending its “best”, and many other zingers. What is his official position, though? His campaign site…

mentions the “plan” for a Mexican built wall;
addresses the desire to triple the amount of ICE officers;
wants an end “catch-and-release” (those coming over the border are fingerprinted and turned back around);
supports defunding sanctuary cities (local jurisdictions that refuse to send information about nonviolent immigrants to ICE for deportation);
want an end birthright citizenship*;
wants requirement to hire American workers first, immigration moderation, and nationwide E-verify;
reiterates desire to deport all 11 million undocumented people, and then allow them to apply legally to re-enter
*Impossible given 1) the laws of inadmissibility once you depart after a year of unlawful presence, and 2) lack of resources.

Trump and Cruz seem to agree in virtually every outlined plan for reform. How does the third candidate fair?

he will “cancel President Obama’s unconstitutional executive orders, eliminate federal funding for sanctuary cities, deport criminal illegal aliens, hire 20,000 new Border Patrol agents, finish all 700 miles of walls on the southern border, implement an entry-exit visa tracking system, implement a functional e-verify system, and install $4 billion in new cameras and sensors on the border;”
his opposition to a path to citizenship; *Not sure if he would allow for any exceptions?
“Our immigration system, designed primarily to reunite families, is an outdated relic of the last century. This system worked for much of the twentieth century, when we had no shortage of low-skill, middle-income jobs and the government safety net was still fairly limited. But today we have low to nonexistent growth, a shortage of good jobs and a massive web of needs-based programs.”
Rubio is in agreement, for the most part, with the other two party candidates on the importance of securing the border and changing the current immigration climate in the United States.

The question now is, will Americans vote with the views of these candidates?