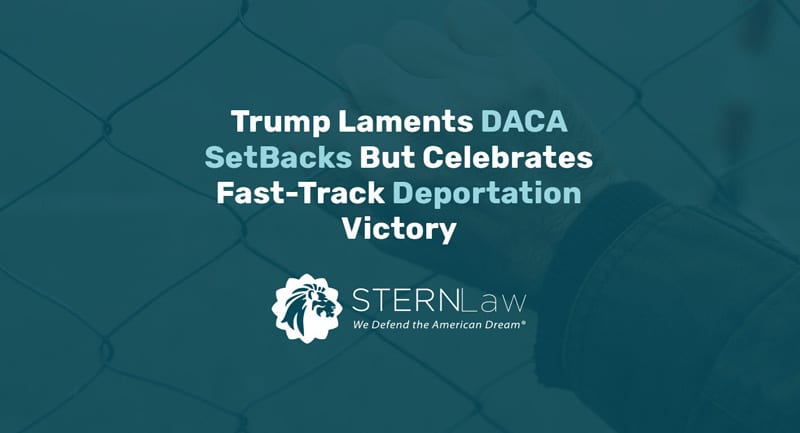 Since 1996 it has been lawful for low-level immigration officers to quickly deport “some” non-US citizens through a process known as Expedited Removal or ER. The ER process was intended to allow immigration officials to deport individuals who commit fraud or misrepresentation as well as those who arrive at the border or enter the country illegally and are apprehended within two weeks of arrival.

However, since last year, the Trump administration has attempted to implement new rules that expand the expedited removal process to apply to more people. Most recently, Trump was cleared to fast track deportation proceedings for undocumented immigrants, who entered illegally less than two years ago, found anywhere in the U.S., instead of just two weeks ago and within 100 miles of the border. This has alarmed many members of the immigrant community and we want to demystify what these developments really mean. In this article, we will clarify the potential impact of these new rules, who they apply to, and how you can protect yourself and your loved ones.

The New Rule of Expedited Removal is Intended to Instill Fear
At STERN Law, we have been following the development of the ER process closely and want to reassure you that the Trump administration’s tactic of widening the parameters for Expedited Removal is more about instilling fear than anything. President Trump began his efforts to widen the use of the ER process last July but a lawsuit brought on by advocacy groups put a halt to the implementation of the new rule.

A few weeks ago, a federal appeals court in Washington reversed the lower-court order that originally blocked the implementation. This means that the ER expansion can now move ahead. But even though President Trump is counting this recent clearance as a victory for his immigration agenda, the reality is that the number of people who it can actually apply to is still limited. Also, the same advocacy groups that challenged the rule last year plan to do so again on new claims, so there is still a possibility that the new rule will not be implemented for long.

Who is truly at risk of Expedited Removal and who isn’t
The Department of Homeland Security was previously limited in their use of the Expedited Removal process only in cases where undocumented immigrants were 100 miles from the border and were within two weeks of arrival. But they also had to meet specific criteria. Now they are subject to the same criteria but can use the Expedited Removal process to remove undocumented immigrants, who entered illegally, who have been in the country for two years or less. They no longer have to be within 100 miles of the border.

By widening the timeline from two weeks to two years and expanding the geography, the greatest risk is that the Department of Homeland Security will probably deport individuals with high rates of error or mistake, simply because a person cannot prove how long they have been in the U.S. or how they entered. It is extremely important to understand the criteria so that you and your loved ones don’t become part of Expedited Removal erroneously, without due process.

Who Can be Deported Through Expedited Removal
Non-U.S. Citizens Who…

Have no lawful immigration status AND
Entered the country without inspection AND
Have been in the U.S. less than two years AND
Cannot prove that they have been in the U.S. longer than two years
Who Cannot be Deported through Expedited Removal
U.S. citizens
Non-US citizens with valid immigration status
Lawful permanent residents
Conditional residents
Lawful visa holders with current visas
Others with presence permission
Out of status non-USC’s who were legally admitted into the U.S
With a visa
With visa overstay
With other valid entry-permission document
Non-USC’s who can prove that they have been in the U.S. more than 2 years
Steps you can take to protect yourself
Whether or not your situation qualifies you for deportation through Expedited Removal, it is important to protect yourself and your loved ones from the wave of aggressive deportation that may result from the recent developments. If ER conditions do not apply to you, make sure that your documentation is up-to-date, saving and documenting any proof. For example, carry a folder with documents that establish your presence in the U.S. for more than 2 years. You can request our help to prepare a Deportation Defense Preparation Plan from us right here.

If you have concerns or need help with immigration benefits or status adjustment, talk to an expert immigration attorney who can review your situation right away. If you qualify for any immigration benefits, don’t delay in reaching out to us as soon as possible. During all of the Trump Administration’s limitations on legal immigration, this is not the time to wait and see what happens. At STERN Law, we are ready and able to assist you in determining what immigration benefits you may qualify for. You can contact us, even if you have been told by another attorney that you don’t qualify for anything because of a criminal record or some other reason, we may be able to help you the way we have helped others with complex cases.

Join us in our fight to empower the immigrant community
At STERN Law, we are committed to defending the rights and the dreams of non-U.S. citizens. It is the primary focus of our law firm, and the main reason why we create informative content like this. We want to keep our community educated about the issues that affect the immigrant community the most so that non-U.S. citizens know their rights and are more confident in demanding that they are respected. We want to invite you to join us in our mission by sharing this content with as many people as possible and joining the conversation with us around important topics. You can follow us on your favorite social media and or contact us at (404) 476-5820.