Immigration Under a Trump Presidency 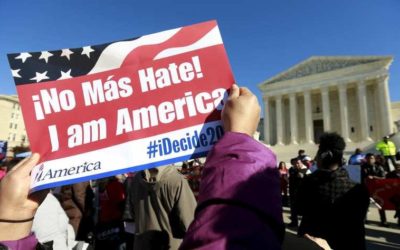 For many across the country and world, our biggest nightmare has become reality: Donald Trump is the next President of the United States. The immediate after-shock created a wave of troubled calls and emails from non-U.S. citizens and families terrified about their fate in this country. Will my green card be revoked? Will I be deported? Can my wife still enter and become a resident through our marriage? What does this mean for our family?

We have reason to be anxious. Mr. Trump targeted anti-immigrant sentiments throughout his campaign and claimed he would take drastic measures to affect millions of noncitizens and their futures here.

The truth is that these claims were strategically used to gain popular support of the majority in this country who simply know nothing about our immigration laws or policy. He has changed his thoughts and plans so much, depending on the audience, that it is impossible to assess what he truly intends. What we know is that Donald Trump has never worked in government. Now, Donald Trump will face the full power of law, society and national realities. The American Civil Liberties Union (ACLU) released a statement after Trump’s victory, which we echo:

“We will be eternally vigilant every single day of your presidency. …The Constitution and the rule of law are stronger than any one person, and we will see to that. We will never waver.”

STERN Law can’t deny that changes to immigration policy are very likely on Day 1 of a Trump presidency. However, by then, our next president will have met with experienced agency heads and legal experts who can only tell Donald Trump the truth – that he cannot realistically do what he claimed, and it is not the right move. The United States will not deport the estimated 11 million undocumented folks with whom we share our communities and families.

Right now, the only immediate result is a national, government-wide conversation about how to change the laws and policy of immigration. This conversation is critical. We will face hurdles, but this will ultimately force positive change for many non-citizens who have waited a very long time for our country’s recognition. Now is a good time to reach out to your networks and seek legal counsel for any concern of current or future status.

No matter what, we will protect our clients, friends, and families who fear anti-immigrant policies. We are honored to stand by your side, in between you and the Government.

We will Defend the American Dream!