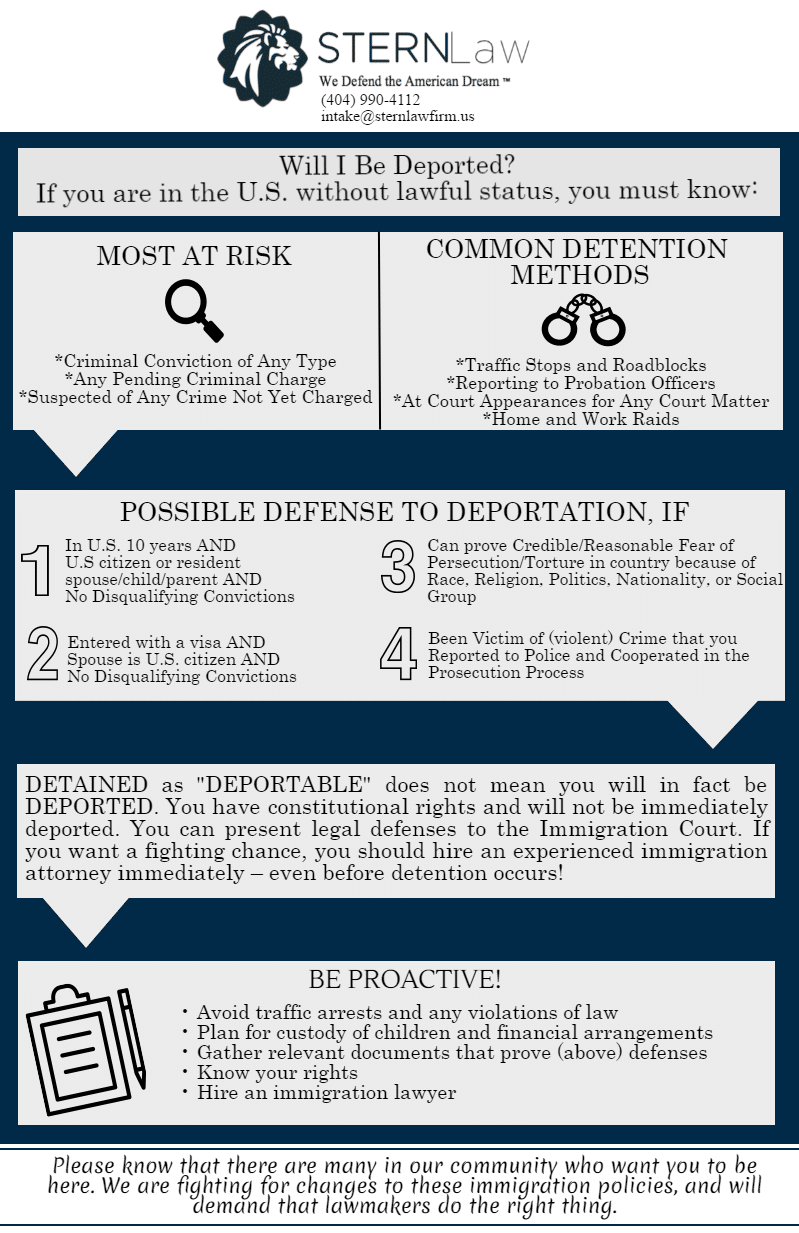 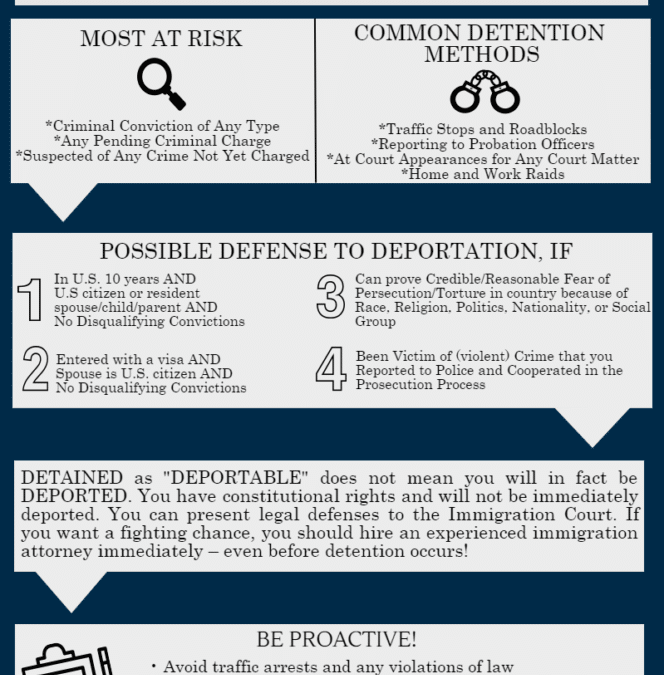 Changes in immigration enforcement policy now call for ICE enforcement against anyone who is unlawfully in the United States. During President Obama’s administration, ICE focused its resources only on removing people with certain types of criminal convictions. If you did not fit into that category, ICE would not bother you. However, things are very different now under the Trump administration. Currently, anyone who is in the U.S. unlawfully is at risk of ICE detention and removal proceedings in Immigration Court.

ICE’s highest priorities are those who have a criminal conviction of any type, those who have a pending criminal charge, and anyone suspected of committing a crime but not yet formally charged. ICE’s most common methods of detention are through traffic stops or roadblocks, as well as reporting to probation officers. We have also started seeing ICE arrests at court appearances, and ICE using court records to find addresses for home and workplace raids. 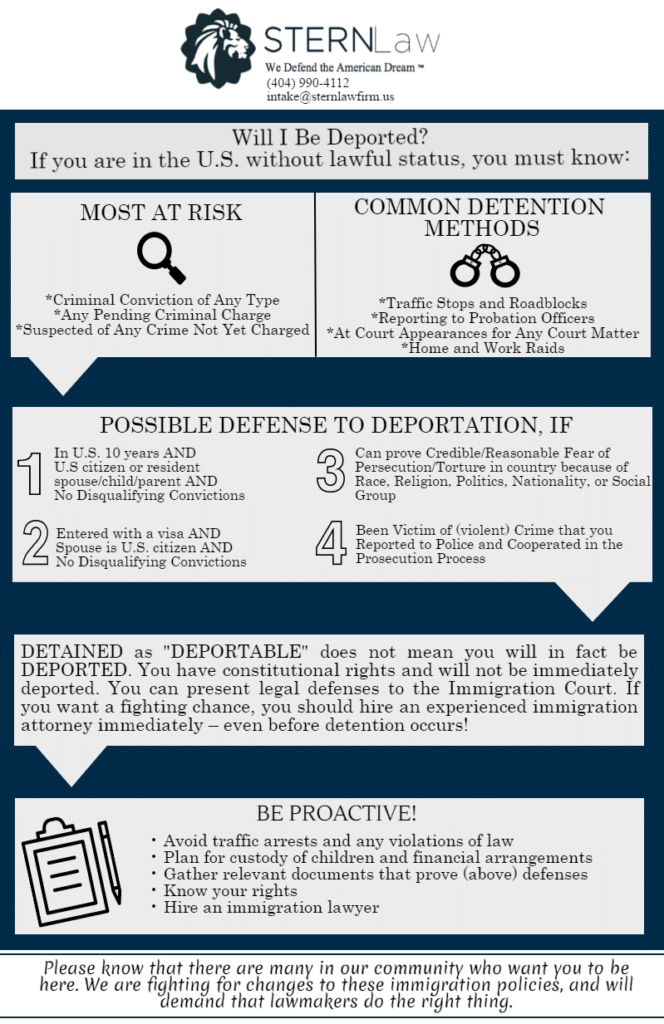 Challenging Detention and Deportation
This type of enforcement is vastly different than before– and it’s scary. However, just because you are at risk for detention or removal does NOT mean that you will actually be deported. It is important to understand that being deportable does not equal deportation. Remember, deportation is not immediate, and the U.S. Constitution protects everyone in the U.S. You will have the opportunity to challenge your deportation in Immigration Court. If any of the following circumstances apply, you may have the ability to fight deportation charges. (Note: not everyone who qualifies will be successful):

Having proof of these basic qualifiers could provide an argument for your release from detention on an immigration bond from the court. This can also give you the ability to fight the court case while you are free from custody. (Also based on the promise that you will return to court in order to fight the rest of the removal case).

Deportable ≠ Deportation
It is important to understand that just because you are technically deportable does not mean you are actually going to be deported. Please do not make uninformed decisions such as fleeing from custody, not showing up for court, or just leaving the U.S. in fear. If you plan to live in the United States now or in the future, you must seek legal advice about how your actions may impact your future legal options in the U.S. You must fully understand the changes in immigration before making any rash decisions. For example, if you leave the U.S. after one year or more of unlawful presence, you trigger a ten-year bar from lawful admission into the U.S. If you flee immigration custody or avoid reporting back to court, you may ruin your chance of being able to argue for an immigration bond.

Have a Plan in Place
If you know that you are at risk for removal, it is important NOT to put yourself in situations which increase your chances of detention. Avoid driving without a driver’s license or otherwise breaking the law. If you have a court date coming up, hire an immigration lawyer to represent, protect, and give you proper advice before and during your court appearance. It is also a good idea to have an emergency plan in place. Consider: which family member you would call in an emergency, whether you are prepared to hire an immigration lawyer, and how you want to protect your family and children. Many parents are preparing guardianship paperwork to clarify who will take care of the children in case they (the parents) are detained.

It is also important to know your rights. If ICE comes to your home, you have the right NOT to answer the door, unless ICE presents a warrant. You have the right to remain silent, and can refuse to answer any ICE questions when your lawyer is not present. Additionally, it is a good idea to gather any documents which prove you have been in the U.S. more than 10 years (ex: tax records, leases, bills, etc.) and/or proof that you have a qualifying family member (ex: marriage and birth certificates).

These are uncertain times for many of us. The current Administration’s fear tactics will create long-term consequences and deeply-rooted trauma for our nation. Please know that there are many in this country, and in our community, who want you to be here. We are fighting for changes to these immigration policies, and will demand that lawmakers do the right thing and implement laws which protect those who are woven into the fabric of our country.