ANNOUNCEMENT: More Immigration Raids Feared for May and June 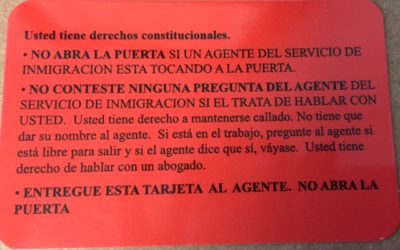 ANNOUNCEMENT: More Immigration Raids Feared for May and June

Contributions by Gabriel Pino, Paralegal for STERN Law
In an announcement just yesterday, May 12th, it is reported that the United States government is planning more raids that will last throughout May and June 2016. As before, these new raids will focus on immigrants that the Department of Homeland Security considers a “priority for deportation.”

These priorities are: migrants who have entered the United States illegally after January 1, 2014, those who failed to appear for their scheduled immigration court hearings, those who have been convicted of a felony, and those who have neglected recent orders of removal.

For member of the immigrant community to be prepared for the raids to come, it’s important to have a plan should something occur:

Do you have a past criminal conviction? It is not uncommon for someone to have experienced a negative run-in with the law in their past, but often times those in the immigrant community are unaware of the consequences of their arrests or convictions. If there has been a prior conviction, and you are unsure of the immigration consequences, it is important to get in contact with a lawyer as soon as possible. This will help to determine if the individual is considered a “priority” for ICE.
Especially during the period of these raid efforts, members of the immigrant community should becoming unnecessary targets of Homeland Security enforcement efforts. There should be caution when deciding whether to travel outside the U.S. or to apply to change immigration status without first consulting with an attorney.
Should ICE arrive at your door for these upcoming raids, it is important to remain calm and remember your fundamental rights. Oprima aquí para sus derechos importantes Click here for your important rights
Do not open the door but rather communicate through it. Though ICE cannot enter without permission, it is a safer option to keep the door closed during the conversation. Ask them to identify themselves and any warrant. If you cannot understand what they are saying, ask for an interpreter.
Know that an ICE officer cannot enter your home without your permission or warrant signed by a Judge. If for whatever reason they do enter, remember to not resist arrest but to state clearly that you wish to speak with an attorney as soon as possible and that you did not allow them to enter.
There is currently no further information when these suspected raids will begin, but please protect yourselves by being prepared as best as possible. Cuidase mucho.